Ellis Locke—Buluk, Kenya #3: Digging in to the past and the passing of time

The field season keeps chugging along, and everyone has fully settled into the routine of work and camp life. Each morning, the whole crew gathers for breakfast at 6:30 am; there’s always plenty of chai to go around. By 7 o’clock, everyone has headed out for work. Right now the crew is split into two main divisions—the first group surveys for fossil material on the surface while the second group works at the excavation site.

Yours truly, surveying for fossils.

One of the primary goals of this field season is to expose and excavate a bone bed that was discovered at the Dead Elephant Valley locality a few years ago. The bone bed lies beneath a large hill, with many bone fragments eroding out of the hillside and sliding down into the valley below. We hope that by digging into the hillside we can expose this layer and excavate these bones intact before they have been weathered. Given the amount of sediment overlaying this layer, this seems like an ambitious undertaking, especially when you consider that the remoteness of the location precludes bringing in any heavy machinery—all the excavation has to be done by hand! Our work has been complicated by the fact that underneath the surface sand on the slope, the bulk of the hillside is made up of solid rock. But we are chipping away at it, literally, bit by bit. The excavation crew is incredibly hard working and has already exposed enough of the bone bed to keep us busy for the rest of the season.

While the excavation crew is working on the hill, the survey crew heads out to a new location each day to collect fossils. The majority of the fossils here are exposed on the surface. Since the deposits are formed by river channels that carried the bones, the fossils are mixed in with pebble and sand. It takes a lot of crawling with one’s nose inches from the ground to spot tiny monkey teeth amongst all the pebbles.

There are larger bones on the surface as well. Funny enough, “Buluk” actually means “dinosaur” in the Dassanech language. Our ultimate goal may be to collect primates, but it’s been the enormous fossil bones of extinct elephants and rhinos that have caught the attention of the local population. Some of our crew members who grew up in this region have said that when they were children, their parents told them stories about Buluk and the bones of dinosaurs that lived there. They were only off by about 50 million years!

Apollo and Ellen excavating the complete cranium of a small rhino.

Our work lasts until 5 pm, at which point it’s time for more tea and a shower before dinner. This is also the time to look over any standout fossils from the day’s collection. 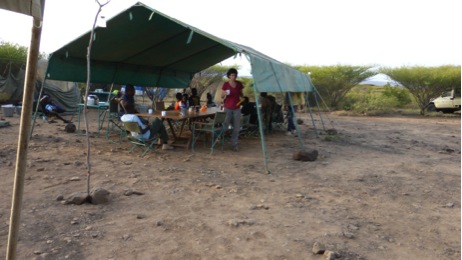 Having been here for more than a month, everyone has found ways to make camp homier. While this will only be my home until July 17 (when I return to the Turkana Basin Institute at Ileret to identify fossils in the lab), the rest of the crew will remain until the beginning of September. To live for three months in a place as remote as Buluk, without any distracting cell service, you have to find ways to stay busy. Whether it’s identifying fossil mammals, becoming a champion checkers player, or perfecting a recipe for charred goat’s head soup, everyone fills the evenings with their own productivity.